Support the Children – Promote Your Business 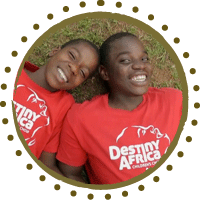 The Destiny Children’s choir will be visiting with us on July 20, 2015.  At that time, they will give a workshop on choral singing and African drumming.  They will then give a performance at night for the community.   We expect 200 children to be attending the camp and 200 guest for the performance.

We would like your company to be a sponsor for our events and we would be grateful for your support.

We have three levels of sponsorship for a brochure design:

Level 1 advertising -$25.00 business card size ad – Your logo and business name will be prominently displayed on our brochure.

Level 2 advertising – $50.00 quarter page size ad– Your logo and business name will be prominently displayed on our brochure.

Level 3 advertising – $100 –  one half page size ad – Your logo and business name will be prominently displayed on our brochure.

Thank you for you kind consideration of this request.  If you would like to be a sponsor, please fill in your donation in the link at the event site.

The Power of Voluntary Benefits

Exerpt from My New Book

Here is a  exerpt from my book, Retailers Guide to Merchant Services,

Compliance13 was created in 2006.  This organization requires merchants and other organizations to follow certain guidelines in collecting and storing, processing or transmitting cardholder information.

This is an ongoing process which involves:

The book is available free on Amazon.  Get your copy today!

The book is also available at your local library on e-Zone. Newport, Middletown, and Portsmouth, Rhode Island libraries have e-Zone installed on their websites.

How Solid Is Supreme Court Decision on Obamacare?

We have a new decision in the Affordable Care Act which is precedent setting and will be very advantageous for many people in the United States who previously lacked medical insurance. But, how long will this law be in effect and how likely is it to be overturned?

This is an important question because there is a presidential election coming soon and the Republicans are not happy about the Supreme Court’s decision to allow subsidies for the poor and middle class applicants for health insurance under the Affordable Care Act.

There are only two ways to negate this decision. Congress would have to amend the Constitution, which would require a three quarters vote from Congress to overturn it. In the past, it has been very challenging, to say the least, to attain a three quarters vote from Congress. In other words, three quarters of the Senators and House of Representatives had to agree that a change needed to take place. It is unlikely the Congress would reach this agreement because so many of the Democrats were supportive of President Obama’s recommendations on the changes in health care.

For the most part, most of the Republicans in Congress are opposed to the Affordable Care Act, while the Democrats are in support of it. It is unlikely, though not impossible, for this law to be amended by Congress at this early stage. There would have to be a good reason for it to be detrimental to the enrollees in the program. There has not been enough time to allow Congress to observe whether or not the law is working for the citizens. In the past, it has taken years for a Supreme Court ruling to be overturned. For example, the Supreme Court issued a ruling in the case of Lochner v. New York (1905) that placing limits on the number of hours a baker could work was unconstitutional. It was overturned in 1937, a total of thirty – two years later.

The case involving Austin v. Michigan State Chamber of Commerce (1990), preventing corporations from making campaign contributions and purchasing political advertising from their general funds was overturned in 2010. However, the Oregon v. Mitchell (1970), overturned just a few months later in 1971, was the fastest constitutional amendment ever overturned.

The Supreme Court can also overrule its own rulings when another case involving the same issues challenges the Supreme Court. There is usually a long period of time from when the Supreme Court rules on a case until the time that it is overturned. This has happened many times over the course of U.S. history.

In conclusion, it is difficult to say at this time whether or not the Supreme Court decision will be overruled, as we do not know how long it will take for the Republicans to initiate a change.